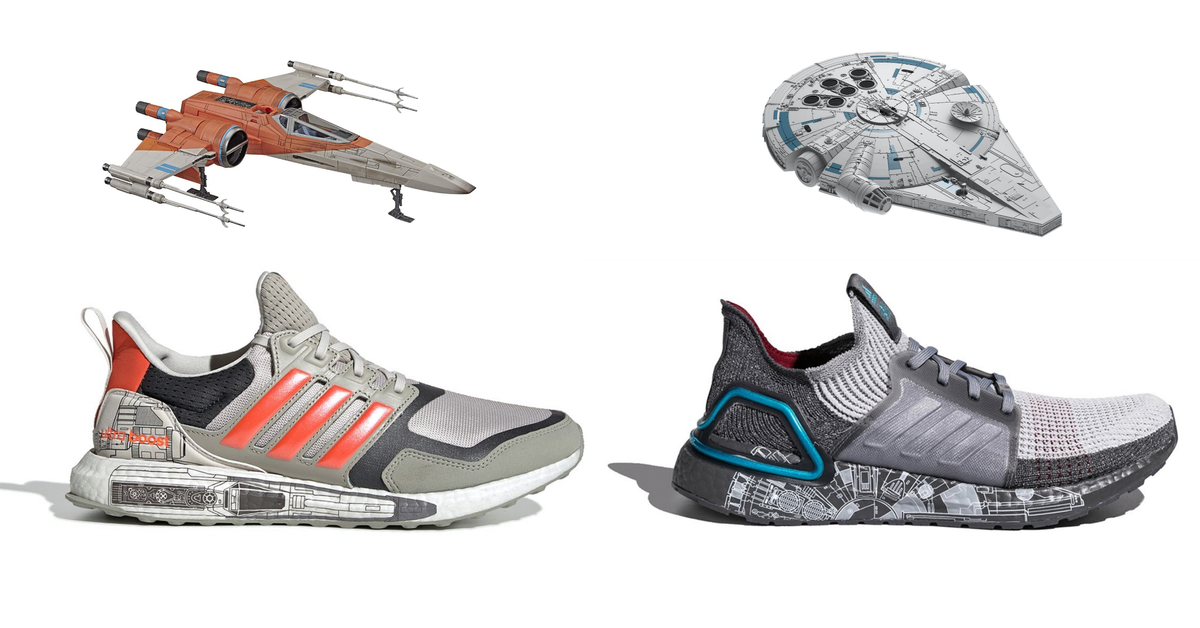 Take an official look at the Star Wars x Adidas Ultraboost 2019 collection which is set to release this week! The collaborative capsule features 2 pairs of sneakers, the “X-Wing” and the “Millennium Falcon”.

It isn’t the first time that we see the two giants, Star Wars and Adidas, working together. In fact, on November 1st they released a sneaker capsule inspired by the upcoming Star Wars movie: Rise of Skywalker.

But, the collaboration between the movie franchise and the sportswear company isn’t over yet. In fact, about a month before the theater release of “The Rise of Skywalker”, we have an official look at two upcoming pairs of Star Wars & Adidas Ultraboost.

The first Ultraboost sneaker is inspired by Poe Dameron’s X-Wing Fighter. It features a gray light gray upper adorned with active orange stripes. Graphics of the spaceship also appear on the white midsole. Finally, you can read “The Force Will Be With You. Always” on the heel tab.

Take an official look at the Star Wars & Adidas UltraBoost “X-Wing” in the gallery just below.

The second Ultraboost sneaker is inspired by the Millennium Falcon, the fictional spaceship primarily commanded by Han Solo. It comes in a darker colorway with sparks of bright blue. The sneaker also features a Millenium Falcon print on the sole and on the left tongue tab. Finally, you can read “Never Tell Me The Odds” on the heel tab.

Take an official look at the Star Wars & Adidas UltraBoost “Millenium Falcon” in the gallery just below.

The Star Wars and Adidas Ultraboost collab is set to release on November 21, 2019. The drop will happen on sneakersnstuff at 12:00 am EST. The price is set for $179 USD.