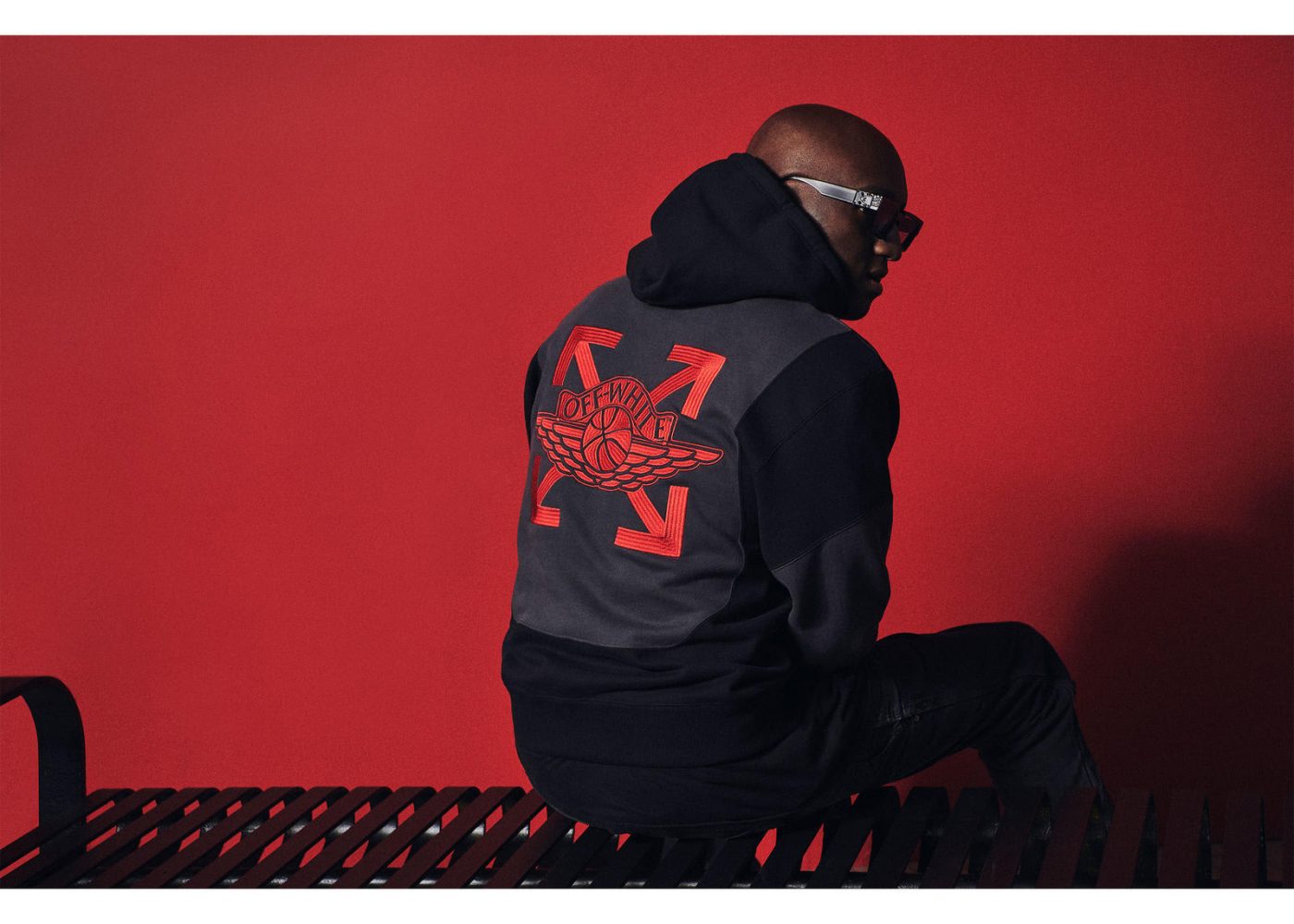 After teasing images of the upcoming Off-White x Air Jordan 5, Off-White went to Instagram to reveal details of the “8×8” apparel collection that will accompany the sneaker. Here are the official images, release info and pricing details of the entire collaboration.

Off-White’s Instagram post revealed two items from the capsule which is expected to feature a woven jacket, pants, a T-shirt, a hoodie and a boiler suit.

For now, we have a first look at the hoodie and the T-shirt.

The hoodie sports a dark two-tone construction with black and dark gray panels. It features a black hood and a large gray area on the back.

In terms of branding, we can observe a red co-branded logo on the back. The Nike Air Jordan Wing Logo is superimposed on the Off-White crossed-arrow icon. Also, the usual “Air Jordan” text is replaced by “Off-White”.

The T-shirt sports a similar design. In fact, we can observe the same logo on the back. However, here it is printed over a black base. Small dark gray panels complete the ends of both sleeves.

Those were the first two pieces of the Off-White and Jordan Brand’s apparel capsule. The clothing collection will be released alongside the Off-White Air Jordan 5.

Inspired by the OG Metallic Air Jordan 5, the shoe features a black textile mesh construction and a 3M reflective tongue.

Branding details include Off-White’s signature “Shoelaces” logo on the laces, a red Jumpman logo on the tongue and Off-White’s Beaverton Oregon print on the medial side.

Finishing details include a synthetic circular overlay on the side panels and a “23” branding on the ankles.

The Off-White x Jordan apparel collection is set to release alongside the Air Jordan 5 on February 15th. Items will be available at select retailers and on Nike.com.

The retail price tag of the sneaker is set at $225 USD. Pricing details for the clothing collection have yet to be confirmed. Stay tuned, we will keep you posted as soon as they come out.

In the meantime, check out the Off-White x Nike Air Force 1 “MCA” Spotted on Virgil Abloh during Paris Fashion Week.

Everything There is to Know About the Louis Vuitton NBA Partnership

Helena Christensen and H&M Collaborate on a 90s-inspired Collection