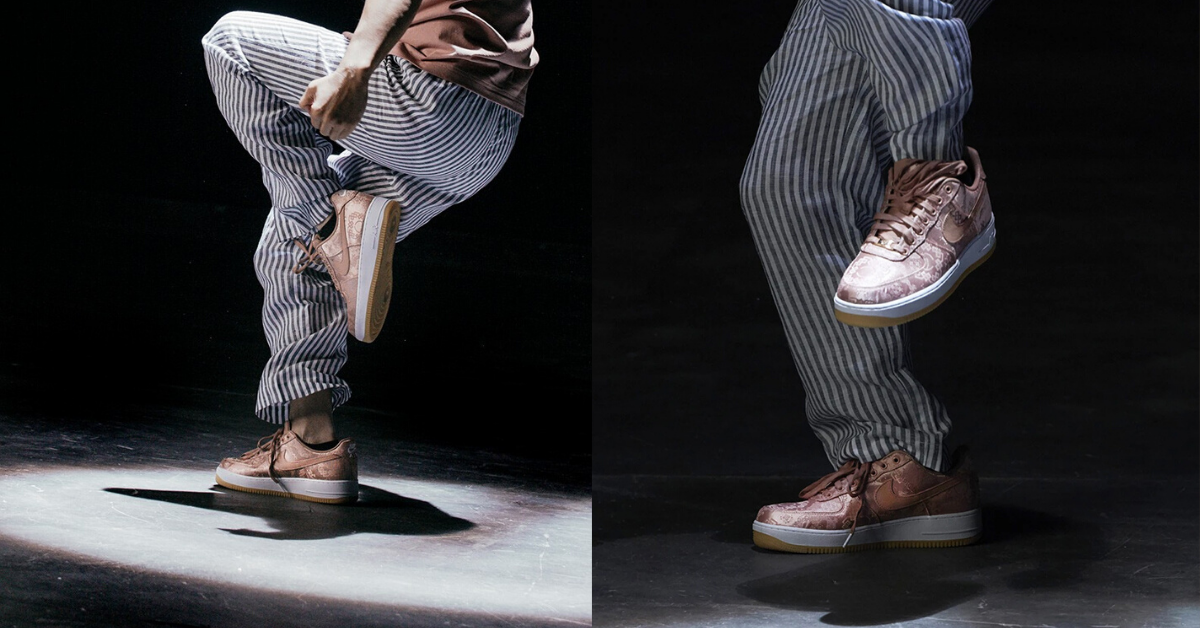 The upcoming pair features a rose gold silk upper wrapped in traditional Chinese patterns. Just like on the other iterations of the pack, these cultural motifs provide texture to a shoe that might otherwise be considered mundane.

Other interesting details include the nude-colored leather midfoot Swooshes, the metallic gold lace lock, and the beige gum outsole, which offer subtle but powerful contrast.

Finally, special branding details appear on the insole and on the lower half of the shoe.

The Air Force 1 “Rose Gold Silk” offers a lighter hue compared to its predecessors. However, the sneaker’s message remains the same “Beauty can be found both inside and out”.

Take a closer look at the CLOT x Nike AF1 “Rose Gold Silk” in the gallery just below.

If you want to compare the sneaker to the previous releases of the CLOT x NIKE pack, here they are. Otherwise, go directly to the sneaker introduction video (a little below).

The CLOT AF1 “Rose Gold Silk” release is accompanied by a short film featuring Donnie Yen, an actor and martial artist known for his role in the popular Ip Man series.

The video showcases Yen’s fluidity and grace, a nod to his mastery of the martial arts. Of course, you can see him wearing the upcoming AF1 sneaker, which totally makes sense…

The sneaker should be released on January 21 on JUICE.com and JUICE China. It will be released a few days later at JUICE Los Angeles, on the 25th.

If you’ve read this far, you’re probably a big fan of AF1s. Thus, you might be interested in taking a look at the upcoming Supreme x Nike Air Force 1 Low SS 2020.