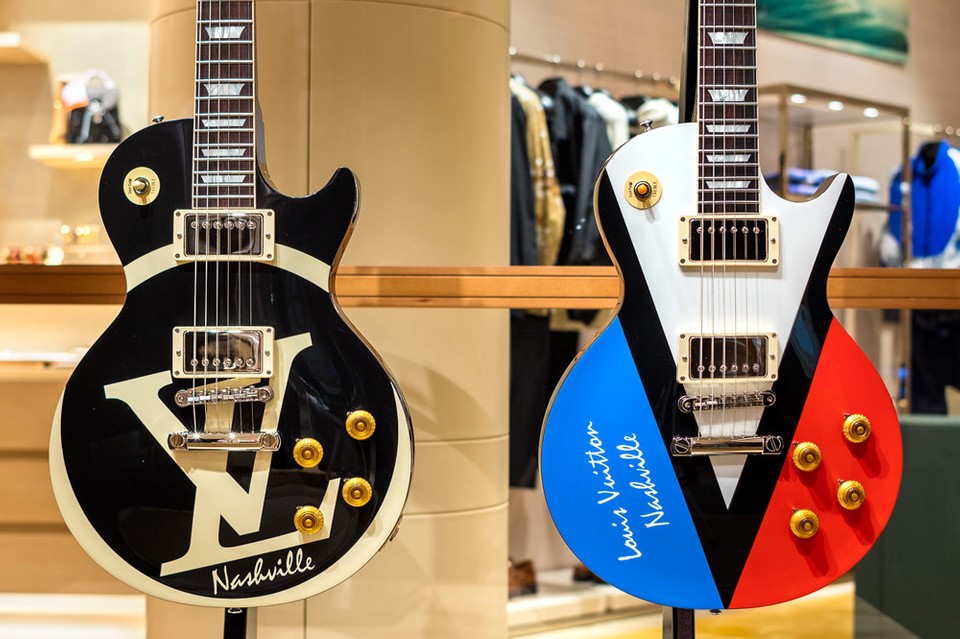 Louis Vuitton thought “outside the box” and unveiled two custom Gibson guitars to celebrate the reopening of its Nashville store.

High-end fashion goes beyond clothes and LV understands that very well. After announcing the upcoming opening of its Café V Restaurant in Japan, Louis Vuitton now reveals two custom guitars to honor the reopening of the Tennessee store.

Crafted from Gibson limited-edition Les Paul guitars, the custom instruments reflect the remarkable craftsmanship and dedication to innovation shared by both houses.

Louis Vuitton’s logos are reinterpreted in both iterations. The black edition features an oversized LV logo in beige while the red, white and blue version presents a handwritten Louis Vuitton script text.

On both, a “Nashville” print appears to show off the inspiration behind the collaboration.

In terms of quality, the guitars feature premium elements that focus on utility such as the mother of pearl fretboard inlays.

Take a closer look at the 2 Louis Vuitton Gibson Guitars just below!

The instruments are featured alongside Louis Vuitton’s usual pieces of luxury goods at the Nashville Store, which also offers a live performance space.

Called the “Music Trunk”, the area takes inspiration from Louis Vuitton’s signature trunks. This musical space is the first of its kind across all of the brand’s locations throughout the USA.

Louis Vuitton’s Nashville boutique is currently open at The Mall at Green Hills. Take a closer look at the store in the gallery below.

If you liked the fact that LV stands out of the typical fashion scene, you might want to discover the House’s first attempt in the catering business. Dubbed the Louis Vuitton Café V, the restaurant will open its doors on February 15 at the brand’s new Osaka store (Japan).

Meet The Shoe Surgeon, Whose Sneaker Customs Sell for Up to $30,000

Customize the Maharishi Air Max 720 with the Wildest Camo Prints