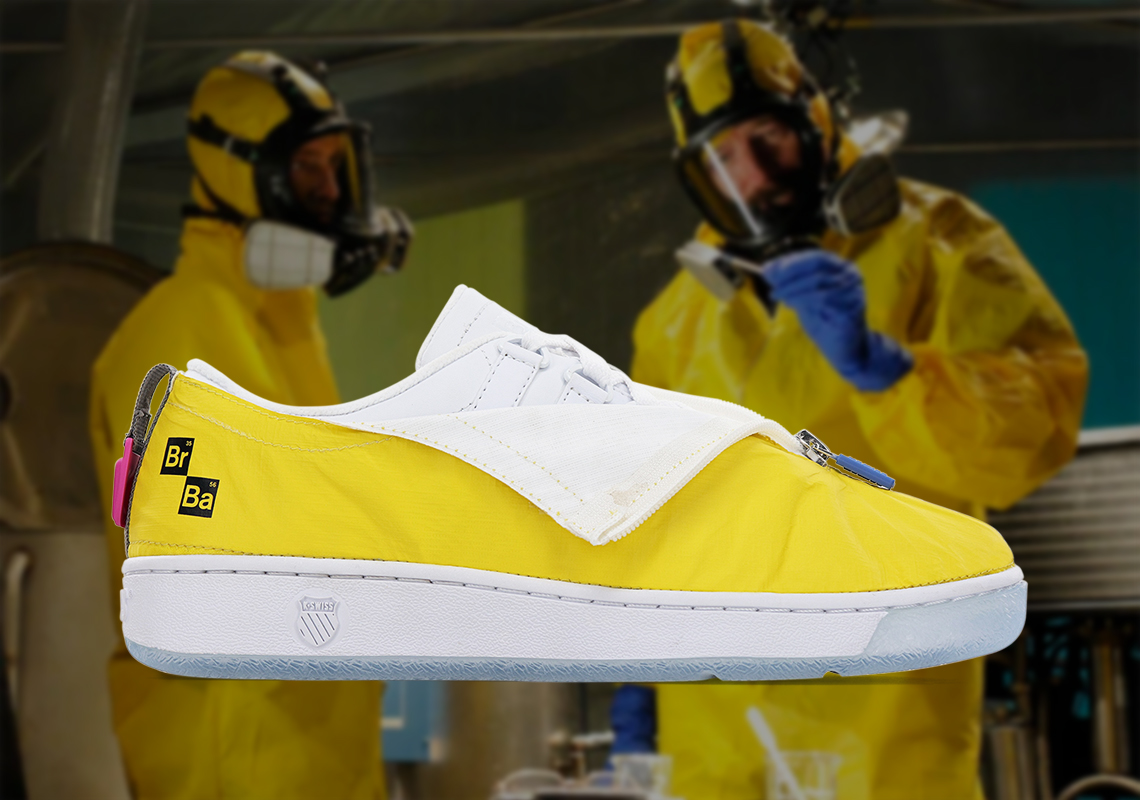 Breaking Bad and K-Swiss are continuing their collaborative partnership that began in 2019 with three new takes on the Classic 2000 sneaker. Here are a complete look and release date of the collection.

Both icons joined forces to release the new Breaking Bad x KSwiss 2000 Collection. Including 3 iterations called the “Cooking”, “Cleaning” and “Recreational Vehicle”, the capsule is reminiscent of key scenes in the series’ history.

First up is the Breaking Bad x K-Swiss Classic 2000 “Cooking” which is inspired by the bright yellow hazmat suits worn by Walter White and Jesse Pinkman.

The iteration features a ripstop overlay that can be unzipped to reveal the sleek K-Swiss sneaker beneath. It also sports Breaking Bad logos on the hell and on the icy blue outsole (A special nod to the show’s blue meth.)

The second iteration is the Breaking Bad x K-Swiss 2000 “Cleaning”. The colour scheme reminds us of when Walt and Jesse moved to Gustavo’s lab. Indeed, their uniforms changed from yellow to rubberized orange.

In the same way as the yellow iteration, the “Cleaning” version can be unzipped to show the shoe beneath and also boasts the show’s famous logo.

Finally, the third sneaker of the pack is the Breaking Bad x K-Swiss “Recreational Vehicle”. This silhouette is a re-release as it originally debuted in 2019.

This one takes inspiration to Jesse’s stolen RV which was the first lab he and Walt “cooked” in. Of course, this pair comes with the same stripes seen on the vehicle and the shoebox is completed with gunshot imitations, another reference to the iconic scene in Breaking Bad’s first season.

The entire Breaking Bad x KSwiss Classic collection will be released on February 20 (today) on footlocker.com and kswiss.com. Prices will range between $80 and $90 USD.

Sneakerheads, while you are here, take an official Look at the upcoming Supreme x Nike Air Force 1 Low