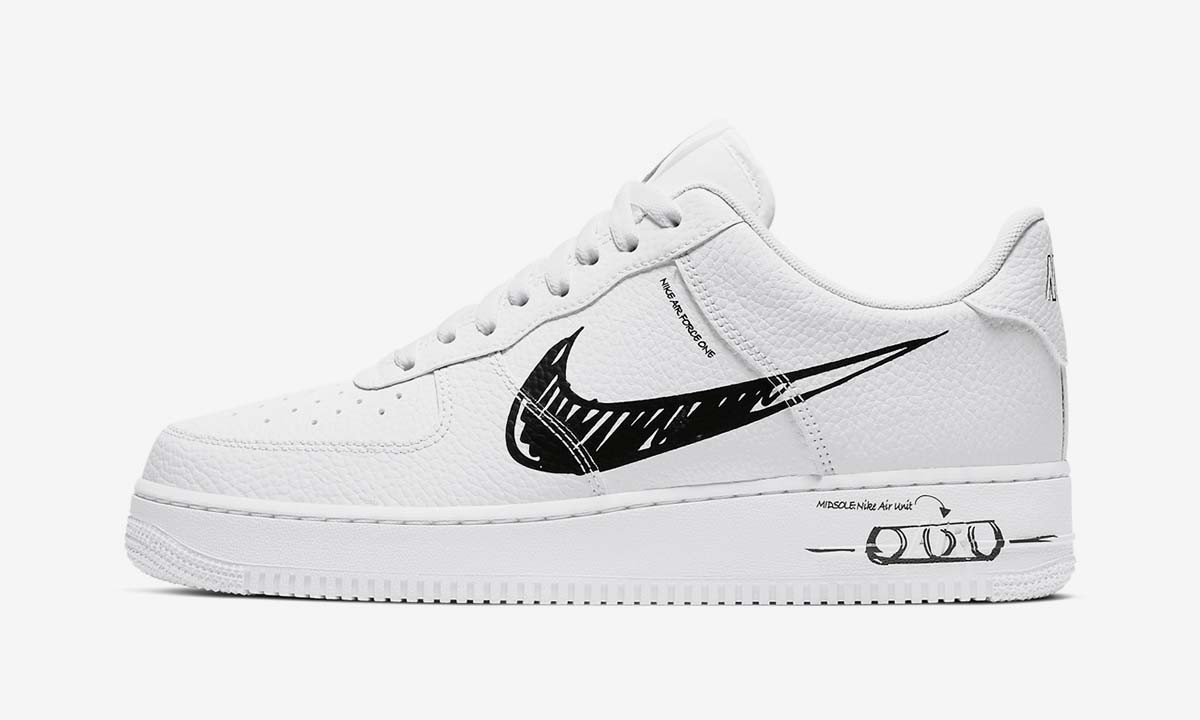 After paying tribute to the sneaker creating process with the “Sketch to Shelf” Air Max 1, Nike has unveiled the “Sketch Swoosh” AF1 & Blazer Mid. Here’s a first look at both silhouettes.

The Sketch Swoosh Af1 is inspired by rough sketches from Tinker Hatfield’s notebook.

Working on the OG “Triple White” colorway that we all know, the smooth leather acts as a canvas for the illustrative details. The design appears to have been done with a thick black marker.

The Nike Swoosh branding graces the side panels, while other little footnotes appear all around the design.

Texts such as “Nike Air Force One”, “Variable Width Lacing System”, and “1982” can be found on the sneaker. The latest pays homage to the shoe’s debut year.

The sneaker sports a clean white Air midsole and a funny detail appears on it. We can see the drawing of an Air bubble and an arrow pointing at it with the caption “MIDSOLE Nike Air Unit”.

Take a closer look at the Nike AF1 “Sketch Swoosh” in the gallery just below!

In addition to the Nike AF1 “Sketch Swoosh”, a Blazer mid will be released with a similar design.

Despite noticeable similarities in construction and composition, each silhouette also proffers some unique accents. In fact, the Blazer sports small Swooshes on the heel, a “1977” print on the forefoot and a clever midsole graphic.

Release Date of the AF1 and Blazer “Sketch”

The Nike Air Force 1 and Blazer “Sketch” are set to release in the coming weeks on Nike.com. Stay tuned, we will keep you posted as soon as an official release date is revealed.

In the meantime, grab a look at the upcoming Supreme x Nike Air Force 1 Low.

Someone Actually Bid $30,800 USD for Three Supreme Oreos on eBay

BVLGARI Transforms its Iconic Micro-bag into a Serpenti AirPods case