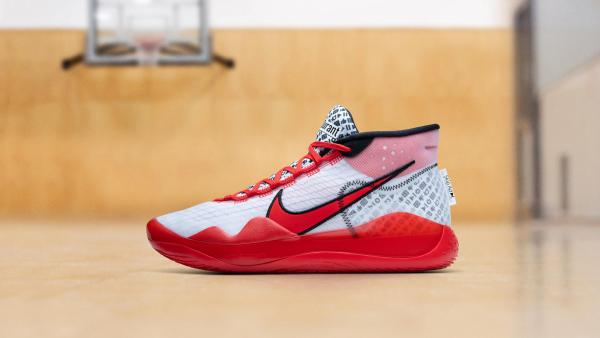 The 74th NBA season will begin on October 22nd, 2019 and will end on April 15, 2020. As always, the opening week is an annual opportunity for sports company to release NBA sneakers.

6 Nike Basketball signature silhouettes such as the Kyrie5, the KD12, the PG3, the Air Zoom Freak 1, the Alpha Dunk and the Lebron 17 will gradually be seen on the court as they release on SNKRS in North America.

NBA 2019-2020 is right around the corner and with this new season comes plenty of fresh footwear. Without further ado, here are 6 best NBA sneakers for the upcoming season.

The Nike Kyrie 5 SBSP is a sneaker collection inspired by the iconic SpongeBob SquarePants television series. It features various iterations referencing different characters of Nickelodeon. For example, Spongebob, Patrick Star, Sandy, and even the pineapple house have their own sneaker.

Apart from the Spongebob collaboration, other models of Nike Kyrie 5 are ready to shine on the NBA court. Take a look at the gallery below.

The KD 12 “Youtube” sneaker is a collaboration between Kevin Durant and YouTube. The pair comes in a red/white colorway with special detailing. The online video platform’s symbols appear in an all-over print on the heel and tongue. A “Kevin Durant” print also appears on the tongue in YouTube’s font. Moreover, a “Skip Ad” symbol appears on the heel tab. The pair is finished with a search bar printed on the insole.

The KD 12 YouTube sneaker is set to release on October 2019 at retailers and on nike.com.

The PG3 Nasa is the collaboration between Paul George and NASA. This pair of PG3 reinterprets the space equipment in a new NBA sneaker. It is made of a blue base, mismatching orange and red forefoot wings. Also, there are plenty of silver details. Of course, the NASA logo is also stamped on the heel and sockliner.

The Nike PG3 Nasa sneaker is set to release on October 23rd, 2019 at select retailers and on nike.com.

Antetokounmpo, NBA’s reigning MVP, is releasing a new pair of Air Zoom Freak 1. Named “All Bros 2” the pair features a mix of red hues, both fluorescent and deep. The sneaker offers striking contrast, with speckled detailing on the signature backward Swoosh.

The Nike AlphaDunk is designed for the biggest jumpers of the game. Aesthetically, the shoe is defined by its engineering. To gain an aerial advantage, athletes have to be positioned farther off the ground. The top of the shoe solves abrasion. The redesigned Flyknit construction offers a sock-like fit that is both soft and strong.

Of course, the model comes in several iterations. Each colorway tells the story of a slam-dunking icon.

The new Nike Lebron 17 features two independent Air Zoom Pods on the forefoot as well as a Knitposite upper. LeBron’s signature detailing has been moved to the tongue, including the citations and symbols “I’m King”, “LJ”, and “23”. The jagged topline is meant to evoke a crown.

4 of those shoes will release via Nike SNKRS during this month! The PG 3 “NASA” will be released on October 23, followed by the Kyrie 5 “Pineapple House” a day later on October 24.

The KD 12 “YouTube” sneaker will be released on October 26, and the Zoom Freak 1 “All Bros 2” will wrap up the NBA opening week sneakers on October 27.

Moreover, the other Kyrie 5 colorways, the Alpha Dunk and the Lebron XVII are already available on Nike’s website.